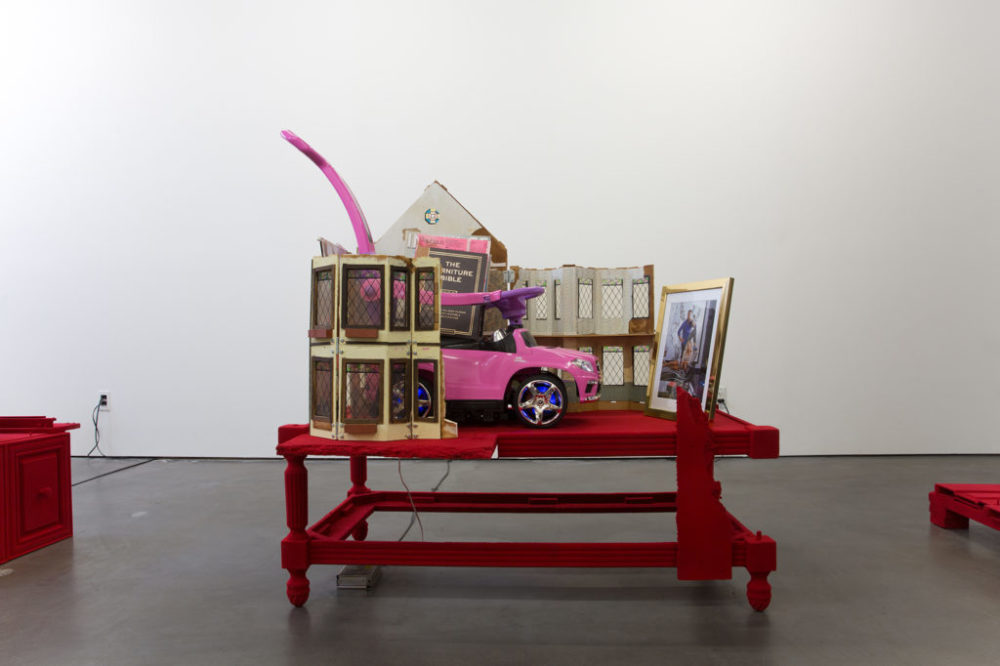 Between dismantled dollhouses and assemblages comprising golf clubs, Porsche-branded trainers, and children’s strollers, Mathis Altmann’s solo exhibition, “Wir sind das Volz”, is a sweeping portrayal of a bourgeoisie sucked into an abyss of its own making. Named after a portmanteau of the German terms for “wood” and “people”, the show draws on the cabinet houses of 18th and 19th century Europe that once symbolized wealth and social mores in miniature. Altmann’s gutted cross-sections of model homes frame bourgeois aspirations as political carcinogens.

Greeted by the tune to Mr. Flagio’s 1983 disco hit “Take a Chance” on repeat, the exhibition takes collector culture as its point of departure. This is most striking in a work entitled, Indulge (2017), comprising a hot pink toddler caddy filled with furniture and design magazines positioned next to a framed portrait of a Miami collector couple ripped from the pages of the eponymous art collecting magazine. This motif is echoed in All human waste is to be stored in the privacy of one’s own home (2017), a sprawling assemblage of human hair, LED-lights and a rotating luxury sneaker, while a nearby stack of wood leaning against the wall presents itself in raw form. In his exhibition text, Altmann writes, “History taught us, the fainting of the bourgeoisie caused fascists to disinhibit their darkest desires.” Through his focus on wood –– a material designed to fence off as much as to construct –– Altmann links our retreat into private space to the isolationism of right-wing populism. This is literally so in the aptly-titled, EUROZONE (2017) wherein a blue-tinted lantern dangles above the bored-out bottom of a dollhouse.

For an art world in which political interventions are made at the level of high-end biennials, Altmann warns that exempting ourselves in such bourgeois safe spaces only serves to amplify the unencumbered Right.