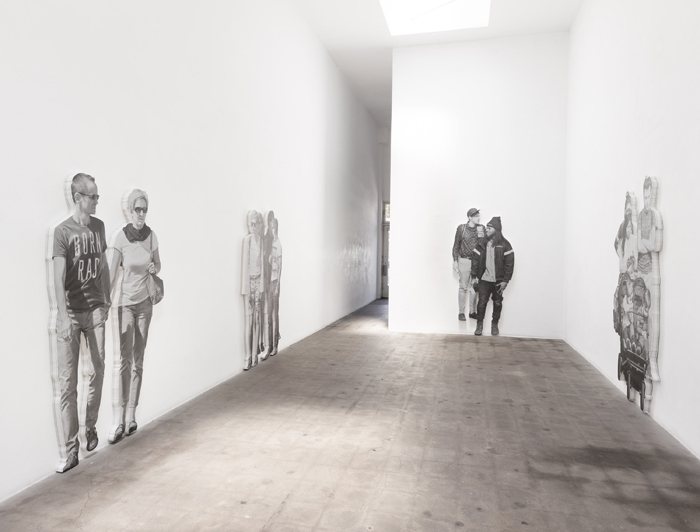 Review of John Miller’s exhibition Relations in Public held at Richard Telles, Los Angeles in the May 2016 issue of Flash Art.

“Sometimes it’s hard to keep up the facade of ‘being a person,’” reads a slide in John Miller’s PowerPoint in his exhibition “Relations in Public.” The piece, Reconstructing a Public Sphere, 2016, introduces an autobiographical bent to the show, otherwise comprised of a straightforward continuation of his grisaille, Dibond and gator board cutout paintings of pedestrians. The PowerPoint charts the artist’s move to Battery Park City right before 9/11, and the confused public space of the neighborhood in the aftermath of the attack. The area became a tourist magnet, while spatially it was marked by public art bizarrely abutting somber memorials to the tragedy.

Battery Park is home to one of the highest concentrations of public art in the world, from Fritz Koenig’s damaged bronze sculpture The Sphere (1971) to Martin Puryear’s steel North Cove Pylons (1995). Unlike Maya Lin’s 1982 Vietnam Veteran’s Memorial or Peter Eisenman’s 2003 Memorial to the Murdered Jews of Europe, the park is a space that intertwines memorialization with real estate development and riverfront leisure space. According to Miller, “fantasy and memory collude against remembrance.”

Miller makes clear that the show’s street portraiture, an extension of his decades-long Middle of the Day photo series, owes something to sociologist Erving Goffman’s notion of intention displays: “the individual makes himself into something that others can read and predict from.” The show’s five painted groupings of pedestrians, parents, and poorly camouflaged Europeans are cropped out completely from their Battery Park City surroundings, leaving only a range of casual, jocular, and wandering expressions.

If, as Miller puts it, “a photo eradicates memory,” then in the removal of his bystanders from their urban context, he questions the kind of self redaction necessary for participation in mediated public spaces.